Claude, our cat, has finally begun to want to go outside. Not for much of the day, but for the odd hour or two. Particularly from 11pm-2am. Oh, boy, is he keen to get outside in those dark, predatory hours. He's worked out to scratch on our ranch slider door to come back in. So now that he's getting keen on patrolling his land boundaries (and other neighbourhood yards) the catflap conundrum comes back into it. We're not too keen on the idea, based on the amount of things he used to bring home to kill inside the house when we lived in the city.

But, still, Jules entertains the idea to make it easy for him and easy for us. (ie no 2am wake up calls, "hi honey, I'm home!")

This morning, after clawing at the couch and the rug, Jules let him outside into the morning damp. I thought he was going to hassle the local magpies (which I think would do him, a good lesson methinks), but no! Instead he returned half an hour later with a small rat in his mouth and perched outside the bifold doors so we could drown him in accolades. He then ripped open its stomach to reveal a litter of pink, bald baby rats, each no bigger than a peanut. He pulled one of them out and tossed it disinterestedly onto the doormat, then stood waiting for us to let him inside, while the rat's open belly writhed with the dying litter.

It was Isla who informed us that it wasn't the rat's guts on display, but babies too. Jules couldn't get near enough the door to really see what things were until Isla said that.

It's a fascinatingly, revolting picture. In fact I should go and take one. But I won't.

And we won't be getting that catflap either.

We are all loving it down here in Rosebud. The Mornington Peninsula is a great place to be, or it's where we want to be now so it's working out good. My wife is happy, my daughter developing into some loud, skipping, energetic bundle of noise, and I'm even more happy that their happiness is obvious.

Yes, everyone loves it except our cat. To say he fucking hates it here would be putting it mildly. He had an altercation with the next door dogs when he strayed onto their property shortly after we arrived and has been chased out from underneath the shed by some huge fat fluffy gloriously insane ginger thing that could well be a cat and then refused to go out at all for the next four weeks. Wouldn't even eat outside, rather starve to death. So kitty litter inside at the moment, and I HATE HATE HATE that. The smell of cat shit permeates the house so intensely and rapidly that we are all gagging and Jules and I are drawing mental straws to see who has to clean up. And clean up we do, as Claude is a fairly dumb chap from what we can tell (or malicious) and positions his bum on the edge of the tray while he sits in the middle. This way he can shit in the tray, on the side of the tray and on the tiled floor simultaneously. We put newspaper under the tray to hopefully negate the shit on the floor thing, but because he tries to dig holes and bury stuff (and he's not burying his piss or his shit so I'm buggered if I know what he thinks he's burying) he ends up ripping or moving the paper to reveal freshly cleaned tiles all a ready for a shitting. After being inside all day, he goes crazy at night time and tears up and down and around and claws everything. I tell you, I ain't feeling much love for the boy. Though we had a breakthrough today and he spent an hour and a half outside with us this afternoon. One of the few afternoons we've been outside too.

It's been raining and freezing for most of the time we have been here.

The house is big and freezing. The floor is freezing. The bed is freezing. My wife is freezing. Ducted heating arrives tomorrow, and the two Fujitsu inverters that don't seem to do much more than remove the ice from the air and rack up enormous power bills will go into hiatus. I've had network cable put into the house (wireless was terrible, hell, things like redtube became a downright impossibility!), quotes (hideously expensive for what we though we were wanting) for custom made book shelves and cd shelves are in progress so we can begin to unpack all my shit basically - books and cds - , new dining table has arrived, couches have been ordered, mortgage growing bigger by the day, new kitchen design (oh, my wife!), skylights needed in the living area, trees chopped down, dirt moved, kangaroos eating the lawn, rosellas flitting, two magpies - the Boss and Her Husband - controlling the airspace of the neighbouring properties, kookaburras laughing their heads off at 6:30am (I don't mind) and a driveway about 40 metres long and all uphill as an excellent start to my physical day upon newspaper retrieval.

I am getting fitter and stronger. That driveway had me out of breath walking up it in the morning, now I'm running up it (albeit slowly) to collect my cryptic crossword. The national park has let us visit four times now, with the shortest walk about 45 minutes, the longest an hour and a half (and that one was just me and Isla, with two rosellas guiding us home from tree to tree).

And two writing projects that pay, that should see me getting my shit together and becoming a full time writer this year. After all, that was part of the plan and originally I was nervous about sitting in front of the blank screen but some things have fallen into my lap, good things, big things, and so the full time writer I shall become. More on that stuff once I have contracts and whether I can make it public.

But I'm busy. I'm happy. My family is happy. If we ignore the cancer card and the god damn cat, things are going just fine.

Jules and I went out to dinner to celebrate the shrinkage and before we had a chance to order, Jules's phone rang. A neighbour 5 houses up from ours said they had found a cat that looked like ours sitting under their car, distressed and with an obviously sore leg. We leapt from the table, drove home, dragged Claude from beneath the car and took him down to the vet.

We left him in there overnight for xrays and wound tending. He can't walk properly, so we're not sure to what extent he has been hurt yet, but he was purring and cleaning himself when we left.

The wee boy had been dragging himself home slowly slowly. I reckon I would have heard him scratching at the front door tonight.

We then went back to the restaurant for dinner.

Someone new turned up to live in our house yesterday afternoon, much to my surprise, and more so to the delight of Isla.

He's black (mostly), furry, friendly, very small, extremely cute and yet unnamed. Claude is the current frontrunner, ahead of Pepe and Basil. 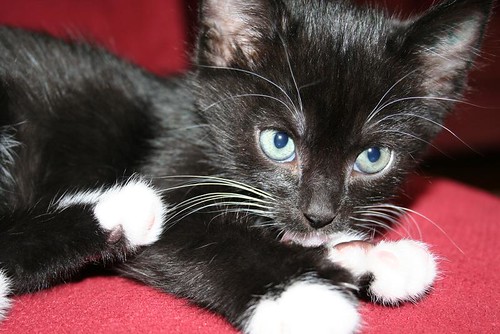 Isla welcomed him with a kiss, lots of squeals, called him Floyd and Floydie-Boy (after my sister's cat which is the only cat she knows, and after all aren't cat's name's just Floyd?) and got a wee touch frustrated that 'Claude' would not do as she commanded. So instead Isla spent most of the afternoon chasing the kitten around the house, under the bed, under the couch, hiding hiding hiding. And some finger licking... 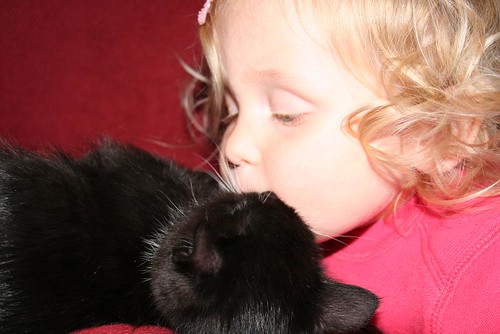